Next week we will announce the winners of the 2019 Cicero Speechwriting Awards. 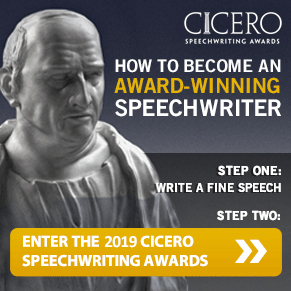 It is not easy, reading speeches in cold, silent print. Like song lyrics, speeches generally depend on sound.

But our judges—likely because they are speechwriters—seem to have no problem hearing the speeches they read. Listening to their comments about the speeches, in fact, it sounds like they're writing about a music concert, or a film festival:

"a crushingly sad story, but the writer suffused it with such tenderness, care and wonder"

"There are so many aching human truths in here that it's hard not to be startled at the boldness of the lines, and the beauty of the words."

"Some lines in here made me gasp."

"I was powerfully drawn in."

"These are heartbreaking themes that I've spent years trying to learn to write well—and i can learn from what i read here."

"a staggering set of gems, each of which, on its own, can carry a speech all alone."

"This writer has an instinctive grasp of beauty and symmetry."

"These are deep truths told beautifully and arranged in an artful form."

A number of the judges remarked that this year's batch of speeches was better than most. Quantitatively speaking, it was one of our most competitive events ever.

Every year, many our volunteer judges—most of whom have been on this panel for half a decade or more—find a different way to thank us for the privilege.

"Discovering these speeches, appreciating the efforts made by the speechwriter, enjoying how they exemplify excellence in modern oral rhetoric (or not), comparing my notes against a dozen of criteria: the whole experience is a great privilege and I am honored to be part of it."

As are we all.

Now we will notify the winners and organize these speeches into the annual Cicero commemorative anthology, These Vital Speeches. Results will be publicly announced next week—including the Grand Award winner, which one judge called "a work of art" and about which another wrote:

"A highly inspirational speech, with a strong opening that makes the audience feels what you describe, well-built story, excellent rhythm, powerful simile … human stories to give the challenge a human face, and strong message … This speech exemplifies excellence in modern oral rhetoric, which the Cicero Speechwriting Awards aim to distinguish and promote: congratulations!"

Veteran speechwriter Jeff Porro became a novice standup comic—and eventually, a better speechwriter. (You can, too.)

‘Speeches are back.’ Let Peggy Noonan be right this time!