I went to get some pants let out a few weeks ago, and discovered every tailor in Chicago is overwhelmed with such work.

This didn’t surprise me, as I’d just absorbed the results of the Speechwriters’ Census 2021 that the Professional Speechwriters Association conducted earlier this fall. We discovered, among many worrisome things, that about 70% of speechwriters feel their mental and physical health has been harmed by COVID—with about 60% unhappy with the amount of exercise they’re getting, and the same percentage unhappy about their weight.

More along the lines that we can help them with, many speechwriters are also lonely, bored, exhausted and unmotivated. Some are angry and fearful about the society in which speechwriting must be done.

And many speechwriters are worried or sad about the changing nature of speeches themselves: All bullet points, few full texts; modern exec comms is too much social media fluff and informal virtual presentations, and too few major addresses.

You can read all about it—stark stats, and also bracing direct quotes—by downloading the report at ProRhetoric.com.

A society where the people who help leaders lead find themselves in a malaise—that’s a society in a malaise. How to get out of the malaise? Here’s what I told speechwriters, at last month’s World Conference of the Professional Speechwriters Association:

• Speechwriters must forcefully defend the traditional, formal speech, as at least an occasional necessity—to mark a moment emphatically, to show naked courage at a moment that requires it, to lay out a vision in long form, using precise words carefully chosen and using the most effective rhetorical structure. Speeches are the “there,” there, in organizations and in leadership. Rich language, precise terms, well-constructed rhetoric, strongly expressed authentic beliefs bravely expressed in person—society is missing those things. And speechwriters can have an influence here; I just talked to one yesterday who kept giving his bullet-point-requesting CEO scripts, until she eventually realized she likes them—and that they give her the courage to be boldly articulate in fraught times, on tough issues.

• Yes, in-person. Speechwriters should push hard to get their speakers involved in more in-person events. What makes a speech a speech—what makes it thrilling for speakers and speechwriters, and everyone involved—is not when a speaker is reading and getting rapt attention from the audience, virtual or otherwise. But when the speaker says something and a ripple of feeling goes out into the room, people start looking at each other, galvanized by an idea—galvanized by their humanity! That can only happen in a room, in person. And that’s the magic that makes speeches matter—speechwriters, too. The dearth of this social magic—from live church sermons to conference keynotes to political rallies—is one of the reasons it feels our society is falling apart. Speechwriters should advocate for live speeches.

• And speechwriters should go into the office, as much as you safely can. Speechwriters think of themselves as loners or introverts, but everyone draws energy and inspiration and motivation as much from colleagues around them than the stated corporate mission or even, on many days, the content of the work. The unhappiest comments from speechwriters in response to this survey seem to come out of professional loneliness and boredom that can be lessened by even a partial return to the office. I just heard from a veteran speechwriter: “I just had my first event trip with the CEO, and it was great. I can’t tell you how good it felt to be back in it at a major conference after … years of isolation in my home office … I’m elated, reborn.”

“Barely,” Christina said, adding: “You might have to chase yourself around the block.” 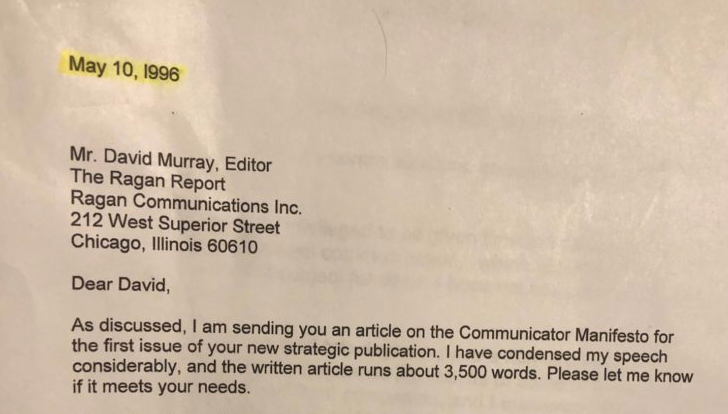